What a joy it is to see flowers blooming again and warmer temperatures on the horizon. The butterflies and hummingbirds have been making an appearance too and it cheers our hearts. Heather and I wanted to welcome in this new season with a giveaway of a couple books we’re really excited about. Be sure to enter below for your chance to win. Praying your spring is blessed and beautiful.

The Ace of Hearts: A Regency Romance (Larkhall Letters Book 1) by Ashtyn Newbold 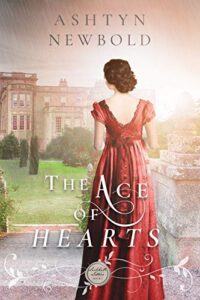 A secret venture, a regrettable love letter, and a heart he can’t afford to lose.

When faced with an unwanted marriage, Alice Rosemeyer accepts an invitation to the estate of Larkhall. Determined to earn her future security without a husband, she begins operating as the anonymous Ace of Hearts, writing letters and offering advice on behalf of the men eager to secure a match at the close of the London season. If she can manage to keep her identity secret, her reputation intact, and avoid the arrogant house guest, Mr. Thomas Herring, she might just call herself successful.

When Thomas Herring’s sister marries an indebted man because of a love letter, he has no choice but to marry into money himself. Invited to stay at Larkhall, he sets his sights on the wealthy sister of his host. When she appears indifferent, he stumbles upon an advertisement: a gentleman offering assistance in matters of the heart. An ace, so he is called. But when he turns out to be she, and also a guest at the same house, his task is further complicated—especially as Alice proves herself to be as captivating as she is clever.

With reputations, secrets, and more than one heart at risk, Alice and Thomas become trapped in a game with no rules, a game neither intended to play. Had they been wrong to play love for a fool?

The Ace of Hearts is a sweet regency romance novel, book one in the Larkhall Letters series by Ashtyn Newbold.

They Turned the World Upside Down: A Storyteller’s Journey with Those Who Dared to Follow Jesus – by Charles Martin 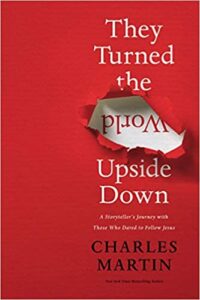 Walk in the shoes of the disciples, as New York Times bestselling author Charles Martin brings their stories to life with his storyteller’s perspective.

In the first century, believer didn’t just mean someone who heard and agreed with Jesus; it meant someone who acted on that belief. And when the outside world saw the faith of these new believers, they declared “they turned the world upside down” (Acts 17:6).

In his second non-fiction work, he uses his talents as a novelist to walk you through the lives of the disciples in the aftermath of the Resurrection and as they spread the message of the Gospel and “turn the world upside down”, leading up to Paul’s ministry in Thessonalica. In his beloved lyrical style, Martin illuminates key moments from Scripture and shares stories from his own life as a disciple.

With the same depth, sensitivity, and emotion that have made his novels beloved to millions, Martin will helps you engage with your faith in a new and inspiring way.

Enter below and these books could be yours! Have a great day, friends!

Thanks for entering! Contest is open only in the U.S. and ends April 30, 2021. Winner will be notified by email.